Yup, it’s my birthday today. I’m 34 years old. I don’t normally pay much attention to the passing of time and I definitely didn’t think that 34 would be an age that affected me but I had a bit of a wobble last week. I’m 34. I’m middle aged. Maybe I should stop having hair like a My Little Pony, having bits of metal shoved through my face and body, stop getting tattooed and dressing ‘alternatively’. Maybe I should stop trying to write, stop knocking on agent’s doors, stop being the way that I am and start acting my age.

But then I had a thought…

What if I did? What if I died my hair to it’s natural colour (whatever that is!), started to dress demurely and packed my notebooks and manuscripts away. How would I feel about that when I was 80? I don’t want to look back and wonder what I could have done. I don’t want to regret the times I didn’t dance in the rain, or the times I didn’t feel like me in my quest to please others, I don’t want to wake up and think about the stories I never wrote or the stories I wrote that I never shared. I want silliness. I want creativity. I want to not worry about looks in the streets or whispers I might hear.

So Happy Birthday To Me. May I carry on ageing not disgracefully but with the grace to just be happy being me.

It was Mental Health Awareness Week last week. Quite fittingly I had intended to write this then but forgot. I do that a lot, increasingly so. Having spoken a lot about my mental health diagnosis I won’t bang on about it too much, however I did want to share this. I don’t think forgetfulness is something that people necessarily associate with disorders such as BPD, bipolar, depression or anxiety disorders but it’s one of my most frequent and most distressing symptoms.

I buy birthday cards and forget to send them. I prepare food and forget to eat it. I make appointments and forget to attend them. And it’s not just a case of ‘Oh, I’m a little bit forgetful, silly me.’ It’s having to stop halfway through a sentence because I’ve clean forgotten what I was about to say, it’s gaps appearing in my vocabulary with this kind of locked in sensation of knowing what I want to say but being absolutely incapable of saying so. It’s going to a shop and feeling suddenly tearful and stupid because I can’t remember what I went there for.

Once more I don’t share this for sympathy, I share it to raise awareness. That friend with a mental health diagnosis you know who says they’ll do something but always seems to flake, the greetings cards you don’t receive, the telephone calls that don’t happen; maybe don’t judge them too harshly, maybe don’t label people with a certain disorder as self consumed or unreliable, maybe just remember that we are not elephants, we are people and people who often forget.

Twenty five years ago this month a gay teenager, Albert Kennedy, fell to his death from a multi storey car park in Manchester. According to a friend who was out with Albert that night they were being chased by ‘queer bashers’. This was not new to Albert, he had been subjected to homophobic abuse regularly, both when out in the vibrant gay scene of Manchester and at the children’s homes that he had been placed with. Albert fitted into the mould of a group of young gay teenagers back in 1989, displaced from their homes, not able to settle in foster homes and bullied in the children’s homes all because of their sexuality. Even the way Albert’s death was reported was laden with homophobia, describing the scene of his death as some kind of plague ridden zone that had to be made safe for the public.

The friend that Albert had been with that night, Paul, was being fostered by a lady called Cath Hall. Cath knew Albert personally but more than this she knew the story of his ongoing persecution all too well. Cath felt that she could not meet the full range of needs of the young LGBT people who got placed with her. As a result, and at the cost of a lot of attack towards her (Cath got called The Witch of Withinshaw), the Albert Kennedy Trust was formed. The Albert Kennedy Trust currently works in Greater London and Greater Manchester and looks to fill the gaps that Cath hall had identified. They aim to meet the individual needs of each young person that they come into contact with and help them to get back on track. They support those young people who have become displaced or been victims of domestic violence because they have come out as Lesbian, Gay, Bisexual or Trans*. Support is available through a range of schemes, mentoring, befriending, online, face to face and phone support, and an accredited training programme to promote independent living skills. The Albert Kennedy Trust works at both managing crises and in planning for the future.

Their work is valuable beyond measure and it is a charity very close to my heart. This is why I chose to make a donation of two weeks of my book sales (as stated in a previous post- Don’t Say The P Word) as well as a personal donation of £10. It’s not as much as I’d like to give but is all I can right now.

If you want to find out more, or support the Albert Kennedy Trust then please visit their site: http://www.akt.org.uk/

Please note I am not affiliated with the Albert Kennedy Trust, I write this solely as a supporter. 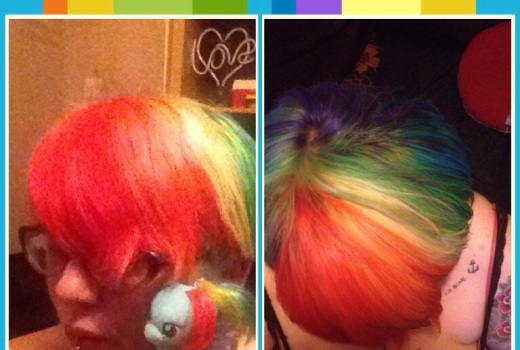 I’ve had two encounters over the last week which made me wonder about how we are raising our children and whether we will ever achieve equality when children get indoctrinated with gender normative messages.

Now I should insert a disclaimer: I’m not a great feminist, I’m more a feminish. I find a lot of the doctrine a bit tiresome, militant people in general scare me and I am comfortable in very traditionally ‘female’ roles: nurse, mother, cook. Before you shout at me I don’t believe that women should be anything other than what they choose, I don’t believe anyone should be anything other than what they choose to be. I believe in humans being human in whichever way they see fit. Ok. We got that? Right, I’ll continue.

So on the way back from Beaver Scouts the other day my six year old son is explaining to me how he likes rugby but not football. He then says ‘Do you know how you should throw a rugby ball to a girl? Like this…’ and mimes throwing a ball very softly, says he was told by someone at a bbq. Cue mummy outrage. I explained how girls can be as strong as men. How some are stronger. I explain that you should assess based on size/ability/preference but definitely not gender. He then turns to me and says ‘Some girls are strong, some aren’t, some just don’t want to be and the same for boys, it’s all alright.’ And I then breathe a sigh of relief that my influence on my son has been stronger than society’s.

A few days later my son and nephew are acting all disgusted at ‘girl stuff’. This is a battle I often lose and am torn on, I believe if my son wants to turn his nose up at pink things he can, but I do try and tell him that it’s (once again) nothing to do with gender. This time however it goes a bit further. My nephew comments on how I have ‘boy tattoos’, I am more heavily tattooed then any man he knows and yet he sees them as inherently male. I tried challenging him, I tried asking why he felt like that and he wasn’t sure but he was entirely unchangeable, my tattoos are like a boy, my short hair is like a boy; society has told him that and I cannot sway him.

Why do children have such gender norms? Do they serve a purpose around finding their identity? Or are we just feeding into inequality? I don’t have the answers, I’d like to just let kids be kids.

…I had to just do a quick post to rave about something. Two days ago I took delivery of two bottles of Liz Earle Cleanse and Polish Hot Cloth Cleanser and it is amazing. I have used it in the past, about 10 years ago, but I am rubbish with keeping up with skincare regimes and even with the simplicity of this it fell by the wayside and I’d stopped using it and, more to the point, I’d forgotten how awesome it is. I don’t have terrible skin, it looks quite clear but I can always feel congestion around my cheeks and have large pores on my nose however I have used this (and only this as I’m too lazy to tone & moisturise) for just TWO DAYS and my cheeks feel smoother and loads less congested and my pores on my nose are tiny. Oh Liz, how could I have ever abandoned you, I’ll never do it again. 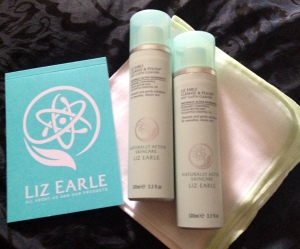